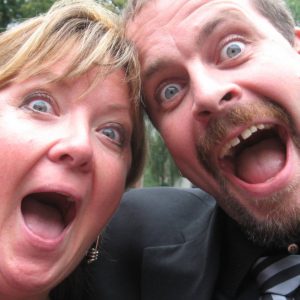 Haico grew up in The Netherlands in a very multi-cultural environment. East Indian, Surinam, Indonesian and many others. This helped him to develop a taste for sophisticated spicy food at a young age. Once Haico moved to Canada he tried to find the same level of flavor and heat in the hot sauces and cooking in Canada, but to no avail. Disappointed, Haico decided to take over the world of hot sauce by growing his own peppers and making his own hot sauce.

The result of this endeavour is an ever growing number of hot sauces varying in spiciness from mild to wild. All peppers and most ingredients are home grown in Ottawa by Haico and his wife, Angela. Any ingredients that cannot be grown locally, due to the weather (like peaches) are purchased on local farmer’s markets whenever possible.

The peppers grown in Ottawa’s backyard vary from Hungarian Wax Peppers, Jalapeños and Mild Chilies on one side of the low-heat spectrum and on the other spicy-side there are Ghost Peppers, Scorpion Peppers, Habaneros and even Carolina Reapers (the current Guinness World Record holders for being the hottest pepper on the planet!)

The result is a wide variety of hot sauces, all with their own distinct flavor palate and heat level. In other words, there is a flavor for every pepperhead or wannabe pepperhead out there! Even people that have never had a liking for hot sauces will be convinced and converted. Before embarking on this journey together, even Haico’s wife thought that ground black pepper on food was too spicy, but when cooking now, Haico’s Hot Sauce is a staple in every recipe!

Haico featured in the Media

5 thoughts on “About Haico & His Hot Sauce!”